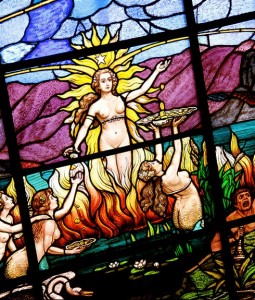 In entry of Museum, a small stained glass above the doors with symbol of “United States of Brazil”, name of the country in the opening this building, was observed and it remained there until 1967. Brazil Coat of Arms was also observed, composed by two branches: one of coffee and another of smoke, which represented two most important crops for Brazil in Proclamation of Republic in 1889.