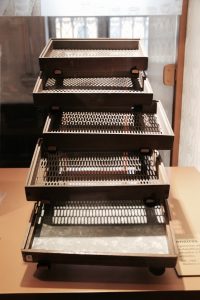 The sieves are made of wood and metal, and are used as a set to classify the coffee beans according to their sizes and shapes. The classification of the bean determines the coffee type (scaling) based on the quantity of imperfect beans and of dirt elements on a sampling and on the size of the beans measured by the sieves. The imperfections are also weighted as a whole, resulting on a percentage of the total weight of the sample.
There are rectangular sieves, used to the plain coffee beans, and circular sieves, used to the mocha type coffee beans. The measure of the sieves are made in fractions of 1/64 inches (a sieve no. 13 has 13/64 inches), varying from 8 to 20.
The set is formed by sieves that were owned by the coffee dealer Álvaro Vieira da Cunha, and were donated to Museu do Café on 2005. Part of the sieves were acquired on 1902 by his father, founder of Santa Rita Office, and the remaining from the decade of 1960 on, when the donator took over the family business.