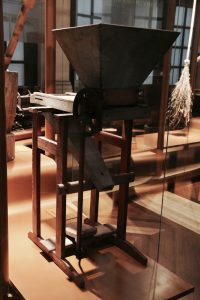 w/o date.
Wood and Metal

Manual machine built with a wooden structure and a cloth conveyor. Usually, it was used on coffee reprocessing on the manual sorting process of the impurities and the imperfect beans from the others. The coffee beans were put on a container located on the upper part of the equipment, and the worker should use the foot switch to move the conveyor and conduct the selected beans to a container under the machine, while the imperfect beans were put in another container. This manual process was almost entirely replaced by the automatic sorting machines except in a few countries such as Guatemala, in which the workforce is cheaper.
This equipment was owned by Ismael F. Coimbra Neto, father of João Carlos Coimbra, from Coração de Jesus Farm, located on the municipality of Oswaldo Cruz, State of São Paulo. He donated the equipment to Museu do Café on 2005, by means of Eduardo Carvalhaes Jr. and José Theodoro Carvalhaes.