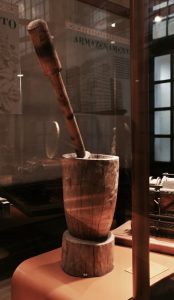 A wooden equipment composed of a pestle and a mortar. The pestle and mortar was a common domestic utensil on the interior of the State of São Paulo. It had several uses, from making canjica, a white variety of corn, very typical of Brazilian cuisine, to building rammed earth houses. It was hardly used on coffee crops, as the coffee volume it could peel at one time was low and the physical effort needed was high. Thus, it was used only on small farms. After drying on the farmyard, the dry coffee was put into the container and rubbed with the pestle to separate the skin from the bean.
This equipment was acquired by Museu do Café on 2004 by purchase.