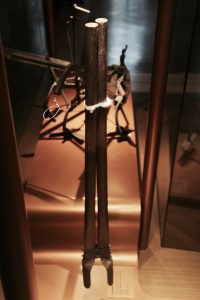 This tool is made of two long wooden stems connected to the metal digger. It is used both in civil construction and on agriculture. It was used on farming to open holes in the ground to plant coffee seedlings. This process can be performed either with the digger or with electrical or animal-powered tractors.
This object was owned by Athayde Mendes de Oliveira, a Spanish descendent that worked as a bricklayer on Cia. Docas between late 1950 and 1984. He won this digger as a gift of a foreman after finishing a service. On 2002, Mr. Athayde gave the object to his grandson, Anderson Rios, who kept it until its donation for Museu do Café.