Associação dos Amigos do Museu do Café [Association of Friends of Museu do Café] (AAMC), old name for INCI, was created in 1998 to promote Museu do Café development, in Santos/SP, with goal of positioning it as main responsible for preservation and disclosure of product history in Brazil and in the world. 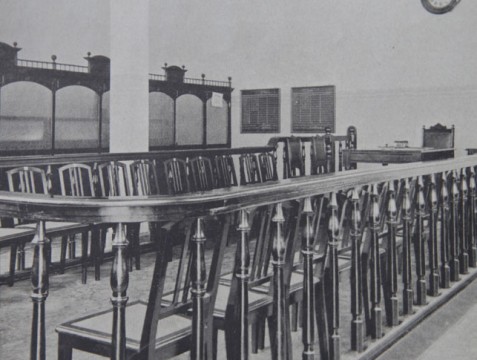 With formalization of Associação, the steps for consolidation of Coffee Museum had been met with agility. With edition of State Decree # 43,389, of August, 18th 1998, the Governor of Sao Paulo State authorized a cession for use of part of installations of Bolsa Oficial de Café Building, which had been restored, with condition of implementing Museu do Café there. With this decision, the Department of Finance made available about 20% of area, enabling actions for implementation and generation of collection of Museum.

In July, 22th 2005, an long-term exposition A trajetória do café no Brasil was opened, which counted with presence of Agriculture minister and other municipal and state authorities. With this performance, the Association gave an important and definite step for acknowledgment of Museum. The visitation area, before restricted only for coffee shop and Auction Room, was enlarged and visitors could contemplate downstairs floor and first floor of Building, where exhibitions are placed.

Other important step for consolidation of Museu do Café, as reference in its sector, was concretion, in December 2008, of change of administration. Since then, AAMC became a Social Culture Organization, qualified by State Secretariat of Culture in Sao Paulo State. Thus, it has been enabled to receive budget and government incentives, committing itself for inspection and accountability to public bodies from State Government, acting upon guidelines and targets set in contract management.

In 2011, after being selected in public call performed by State Secretariat of Culture, Associação dos Amigos do Museu do Café became also responsible for management of old Immigrant Memorial. It was the experience with cultural equipment responsible for preservation of coffee memory, an important character for construction of Brazilian identity, that AAMC placed itself at SEC disposal for implementation and management of new Immigration Museum of São Paulo State. In 2014, for compliance of legislation 11,904, of January 14th 2009, Instituto de Preservação e Difusão da História do Café e da Imigração (INCI) was denominated as Associação dos Amigos do Museu do Café.

The membership is composed by individual or legal entities, or associations and foundation, in the following categories: